Do you know someone who makes a difference for adults in Herefordshire? 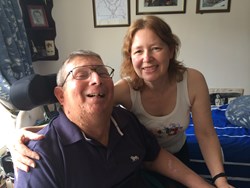 Nominations for the 2018 David Price Award are now open

The David Price Award will recognise an individual who, in an unpaid capacity, has helped change the life of an adult or adults in Herefordshire.

The award is in memory of David Price who sadly passed away in May 2016. David, who was diagnosed with a hereditary condition as a teenager which causes multiple benign tumours on the skin, brain, spine and internal organs, was an active member of the county's Making it Real group. The group is the voice of people who experience adult social care in Herefordshire and the annual award commemorates David's valuable contribution.

The award is supported by Herefordshire Council and is aimed at family members, friends, unpaid carers, neighbours, support workers, members of groups or organisations, colleagues or volunteers; anyone who makes a difference without being paid for it.

A nomination should demonstrate clear examples of one or more of the following:

Sylvie Nicholls, chair of the Making it Real group, said: "We know there are lots of people in Herefordshire whose extra effort and dedication help someone else live a better life. The Making it Real group wants to recognise this commitment and achievement in memory of David Price, who was the epitome of this award.

"We are encouraging nominations from across the county. If you know someone who has gone over and above and deserves recognition, we want to hear from you."